I received item/s for the purpose of review.  No other compensation was provided.  All opinions are a 100% my own. 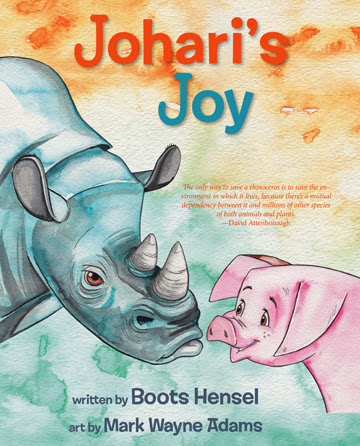 Falling in love with a book is possible, even when it is a children's picture book.  Maybe it is the little detail about the author Boots Hensel that captured my attention.

"Hensel’s first book, The Zoopendous Surprise is based on real life experiences with her daughter Courtney, who worked as a zookeeper with two Asian elephants at the Little Rock Zoo in Little Rock, Arkansas.

"My daughter, Courtney, was the zookeeper for Mary and Ellen, two elephants at the Little Rock Zoo from 2002 to 2004. I visited her often at the zoo and was fortunate to observe these great animals play and interact together. I watched their antics and saw their keen sensitivity first-hand. After Courtney's death from cancer four years ago, I knew I had to write a story about ‘her girls’."

Learning of how she was originally inspired captured my attention, that and the cute story of an unlikely friendship in "Johari's Joy."  Since we started homeschooling this year I looked for different ways to teach my son, and one of our weekly "learning sessions" took place at the zoo, which is probably why he is such a huge animal lover now.  I knew he would love the book, and so he did.

Johari the rhinoceros is alone at the zoo, and so is Joy the pig.  The zookeeper places them together where an unlikely friendship is born.  My son (5) said he believes "it teaches you to not judge by how someone looks from the outside, that even though you could be completely different - you could be the same if you stop and look."

This is a great addition to our library, wonderful artwork by Mark Wayne Adams, and along with an easy to read cute story, it's complete with fun facts and Rhinoceros Jokes in the end.

Both books are available at Amazon.com and online by visiting www.bootshensel.com