If it wasn't for food allergies, I think my whole family would travel near and far just for food.  My son who's five years old truly seems to have a passion for food.  It might be since he has watched me have so much passion cooking/baking for him that he just connects, or it might be the excitement my husband and I express with every new allergy friendly creation I come up with.  Whatever the case, I could tell you amongst his many future plans, one is to have his own cooking show.  Of course I will note that it is along side being a real power ranger and ninja...  He has been helping me in the kitchen as far back as I could remember.  From bringing ingredients out from the pantry, to peeling carrots, to cutting vegetables, he has done it.  He was two years old cutting mushrooms for me with a plastic knife! 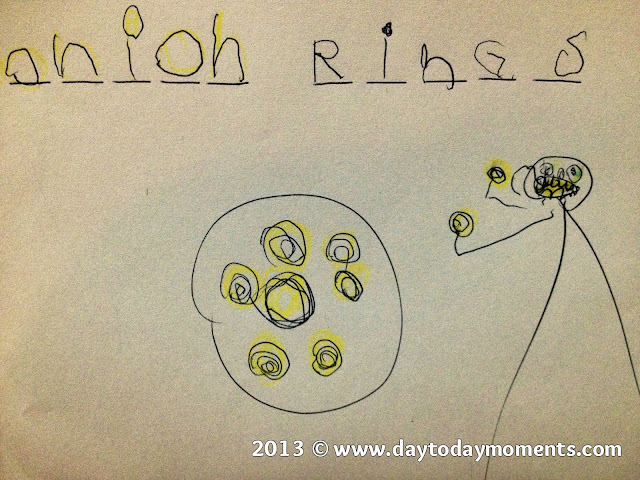 Today he is still helping..when I let him.  Some foods might not like him but he sure loves food.  Here he drew up a photo of him eating onion rings.  He said that his mouth is full of onion rings, and that, this is his happy face.  It makes me smile every time I see any of his drawings.  I recently experimented in the kitchen and the onion rings were a success.  Let me know if you want me to share the recipe, I'd be more than happy to.  Days later I told him to draw a picture of a food he likes, he drew this, guess I should make them again soon.  I taught him from before he could probably fully understand, if he isn't allergic to it, he has to at least try it.  He eats things I wouldn't go near as a child, like onions.  He was allergic to onions for the first half of his life, so he is appreciative for the foods he can have.  :)