Practice makes better, not exactly perfect for me yet! ;)

I can't say how hard it is for me to bake allergy friendly.  Baking from scratch is a difficult thing to do, and something not many do.  But then, I have to bake allergy friendly, which is double the challenge.  There is so much I cannot use, and so I have to make magic with what I have, specially when it comes to decorating.  My little boy turned four last month, and was looking forward to his birthday for months!  He asked me to make him a certain cake every time we saw one anywhere; at a bakery window, on TV, I mean everywhere!  I was "signed up" to make him cakes that looked like a car, a beach themed one, and even a wedding cake!  He would say to me "mommy can you make me that cake for my birthday that's not allergy to me?" and I'd say "yes, I'll try."

His birthday finally came around, and all I could think of was the past birthday cakes I've made for him that didn't exactly work out the way I had planned... 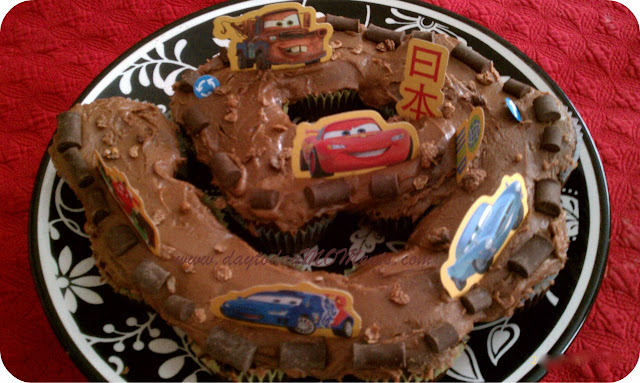 At first maybe it isn't so bad, but then it kinda doesn't look like a nice rocky road full of cars like it's supposed to.  This was for his 3rd birthday, that I made just for us.  He didn't mind, and didn't see the resemblance to anything else..like some did.  "No it isn't the number 9..oh it does not look like __" was my replies to it all with a smirk.  I saw what I envisioned, and saw a curvy rocky dirt road with "cars" racing.  But after others pointed out something else..well, all I could do is laugh now! ;)  I know how difficult it is, and totally gave myself a pat on the back, a chocolaty smile on my sons face was enough for me.

This year I had to make him something special for him, he did request something special.  So I made Angry Birds cupcakes, I've seen much better, and maybe could have done a better job, but this is what I created.   Used the frosting/decorating materials I had, and unfortunately don't have much to work with.   All the kids loved it as they all wanted more than just one, and my son did as well- that's what matters right? :) 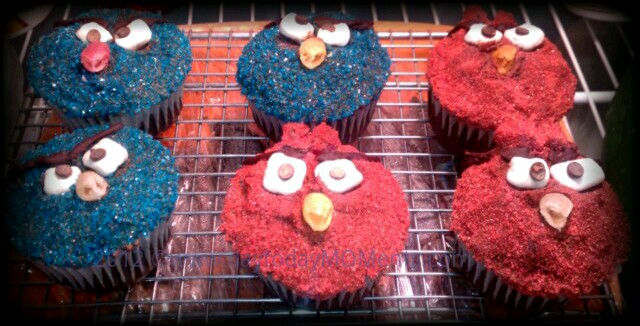 If I had more colored sugar maybe I could have created more, like the yellow bird and the green pig from Angry Birds but unfortunately this is all I had to work with.  I even realized that I was out of the most basic frosting ingredient; confectionery sugar the night before the party as I stayed up late making the cupcakes.  The last item I was worried about, and the one item I was out of.  I ended up making six cupcakes instead of twelve like intended.  Good thing the only person really depending on my cupcakes was my son.  :)

I'll keep creating and experimenting, hopefully I'll be able to say "practice makes perfect" without thinking I could have done this or that a little different!  ;)