My son and I were doing some laundry, as he helped me as he always does.  I was also cleaning up as I always do... :/  I was in the kitchen, decided to surprise my little guy with a sweet treat (marshmallow candy) it said "may contain milk" but I have given him that brand candy before so I gave him a little piece. Of course always aware of the risks of eating almost anything pre-packaged with multiple food allergies.  One bite after another, he ate one whole piece right away, and right after starting coughing a bit..right away!  And quickly his little smile turned upside down. 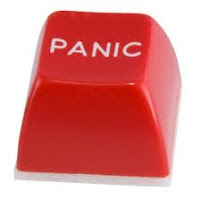 I freaked out, and asked him if he was feeling alright, he told me "NO..this is not good, I think my throat is burning."  So I pretended like I was calm telling him "everything is going to be okay," over and over again.  Right away I noticed he was wheezing, so first I gave him Benadryl, then grabbed his asthma pump, pumped in some Albuterol.  Watched him closely (this is all in like 2 minutes), dressed him, dressed myself.  I didn't see any hives, he wasn't coughing anymore, nothing I could see that was wrong other than still wheezing.  I asked him again how he was feeling, he replied "not good, this is not good, we need the doctor," and held his throat.  He seemed very serious.  I picked up the phone to call "911" about five times in five minutes.  It was decision making time; trust your very worried little toddler, trust my instinct/what I see, call 911, and/or give him the EpiPen shot..I met it all in the middle.

I decided I'd head outside, since in those very long five minutes he was back to talking loud and outgoing again.  I had my phone in hand with "911" already keyed in just in case I needed to, grabbed my bag that has everything we need.  A minute outside, he was all better, his wheezing went away because of the meds I had given him, and if he was having an allergic reaction that went away too because of the Benadryl, I thought.  So we just took a little walk, picked up a refill for some of his prescriptions.  About a half an hour outside he was already drowsy, and soon fell asleep.

As I continued walking outside thinking to myself, I realized that it wasn't the candy after all, if it was milk he had consumed it would have been really bad, hence the panic!  I realized it was the cleaning wipes I was using when he was standing by me taking his first few bites of candy.  That caused him to have an asthma attack, and he described suddenly not being able to breathe right as his "throat burning".  Either way, I'm glad I took all the precautions I could besides administrating the EpiPen shot.  I would have if I saw hives, or any other signs of an allergic reaction, not to say that wheezing isn't one, but I watched him second by second very closely.  Just glad nothing went horribly wrong.  This is just the reality of living with food allergies, sometimes you never know how your day might end up because of an innocent bite.   Most cases that someone had a life threatening reaction is because they ate a food that they thought they were OK with.  This is also the case of living with asthma..I see :/.  Happy this is the only story I have to tell.

And as for those wipes, never using them again! *(they were Lyson disinfecting wipes-lemon lime blossom scent)
Posted by day to day MOMents