He Knew What He Wanted

Ever get tired of cooking every meal, every day?  I do, and tonight was one of those evenings when dinner time came around, and I ran out of ideas or just didn't want to.  It was six and I still didn't have dinner started.  Not to be confused with I don't like to cook, I love to, sometimes we all want a day off.  Because of food allergies, we don't have the convenience of ordering in for the whole family, so it's very rare when we do.

Time passed, and it was seven, it was evident I wasn't going to cook or wasn't going to have dinner at a descent time, so I decided to give myself a break.  I ordered some Italian food for my husband and I.  It's always much easier to cook for him then everyone.  I went to the kitchen with my son as I stood there offering to make him a version of what we ordered out.  Spaghetti with chicken, and he said no.  So how about this, or that..or thaatt?  His response was no to everything I offered him, so I asked him "what do YOU want baby?"

I didn't expect a real answer but he responded by suggesting what he wanted to eat.  He wanted rice, corn, mushrooms, capers, and salami.  Seriously, this is what he insisted, and it didn't sound bad, so that's what we made.  It was definitely not what I'd generally make for him, but something easy and fast, and surprisingly really good if you ask us. ;) 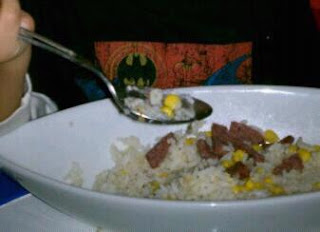 He loves to play restaurant, loves to help me cook I should have known that his creation would have been good.  It took less than a half an hour to make with him, as he brought out all the ingredients and helped me cut the mushrooms.  It ended up being really fun.  I decided to let him make all the decisions for the night; where he eats, which bowls he uses, everything.  He chose a big "boat bowl" as he called it.  He was really excited about it all, and he ate so much, insisting he will eat it all by himself, and so he did.  I got to take a break and enjoy a great evening with family. ♥